One of the primary benefits of being an embassy member is access to our API.

An API is an Application Programming Interface, which is a way to serve information to external developers, applications or services so that they can interact with each other. Our API is designed to simplify the process of communicating with the Ethereum blockchain and allows for the development of distributed applications that can function without the need for centralized databases.

Not only does our API support both public and an unlimited number of private Ethereum networks, but also features a healthy collection of helpful wallet functions that have direct access to our Token and Asset factories, whilst also supporting the DN-Key and BlockAuth protocols. Although it does not completely conform to the HAL standard, it does implement _links & _embedded properties where appropriate, which allows it to be fully discoverable and self documenting in its responses.

Our consortium members can participate within permission-based industry specific networks or create their own private ones for testing new ideas or developing internal pilot projects. The newly introduced wallet endpoints provide useful shortcuts for those building browser-based wallets, especially if they function across a multitude of networks. For example, a wallet interface requires a balance and a transaction count. That’s two API calls already. If you have two ERC20 token supplies to check and two ERC721 asset supplies to cycle through that’s now 10 API calls. If your application is being used on two networks (public and private) that’s over 20 API calls to display wallet contents. With our wrapper functions you can do the same thing, but with just one API call. 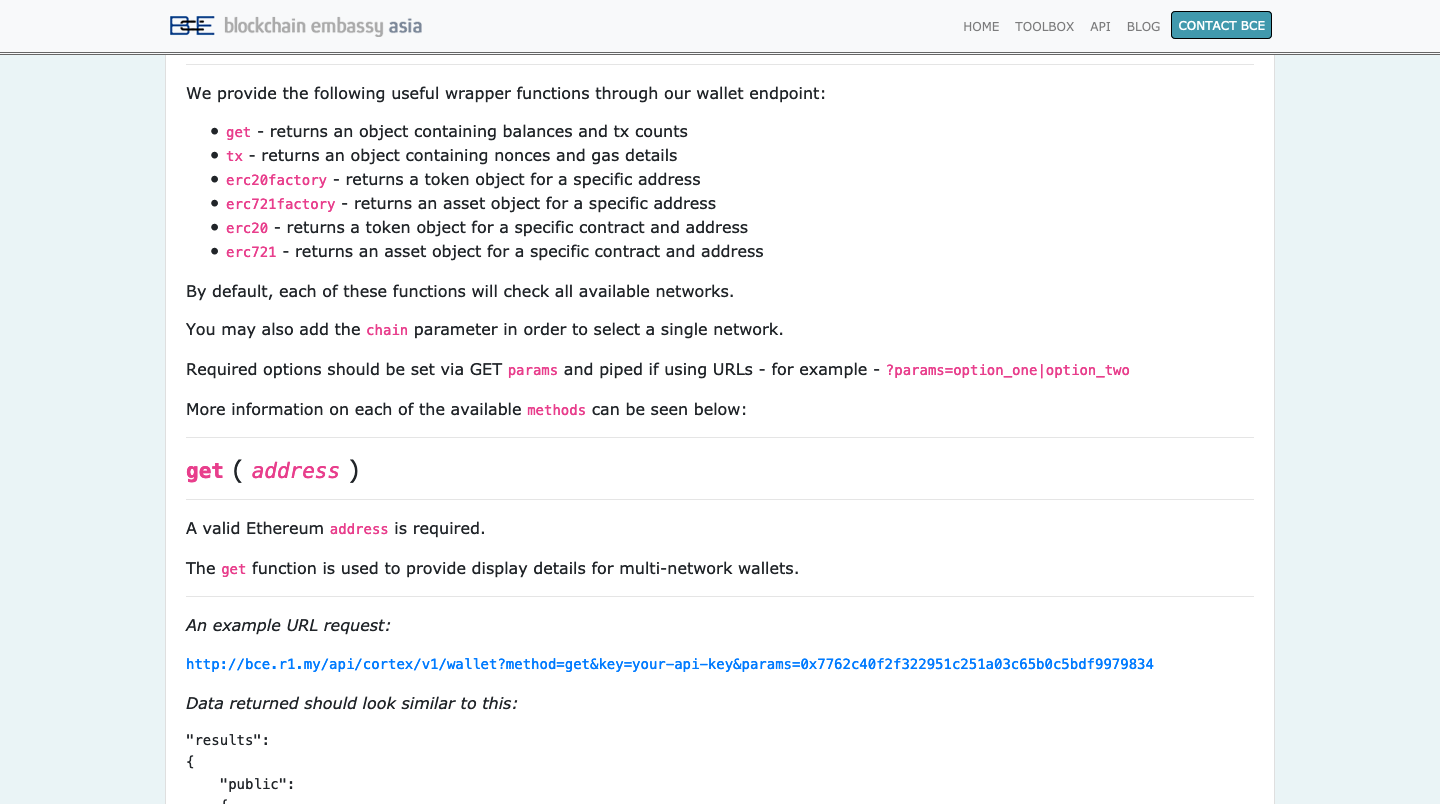 We have been using and discussing our token and asset factory methods for quite some time, as they employee the use of upgradable smart contracts, which utilizes distributed key value stores. This not only enables us to upgrade supplies to new standards without affecting the underlying economics, but more importantly, it also allows for autonomous exchange and extensive re-composition such as combining multiple batches of tokens into new asset classes that can then be passed-on within a single transaction and deconstructed later by their new owner.

The interesting development is that we have now expanded upon this concept with the introduction of our token and asset foundries. The foundries allow our embassy members to launch their own token or asset supplies directly from their embassy wallet whilst also defining whether or not that supply can also be purchased and at what cost – all without writing a single line of code. More importantly, in using the foundries, this also means that the generated supplies are automatically provided their own API too. They can, at the request of the supply’s administrator also be automatically exchanged between other supplies.

The new embassy wallet not only provides a fully functional smart contract explorer that allows users to launch and interact with any kind of contract from any source, but also features unique template bundles that gather collections of contracts with customized interfaces for specific applications and use cases. More importantly, the eWallet is also integrated with both DN-Key and BlockAuth. DN-Key allows users to send currency, tokens, assets and data to domain based usernames such as bce.bloq.press rather than needing to remember irrevocable cryptographic keys.

The integration of the BlockAuth protocol not only allows for the use of non-domain based usernames when transacting internally within the same identity network, but also provides simplified e-KYC functionality for our factory based token and asset supplies, linking identification numbers and names to specific addresses with recoverable functionality for lost keys and the ability to broadcast notifications between users. By utilizing this protocol, users can also authenticate and login to any kind of supporting application by using their blockchain based identities.

For a more detailed look at what the API can do, please read our documentation.

In fact, you should be able to read the API itself – too.